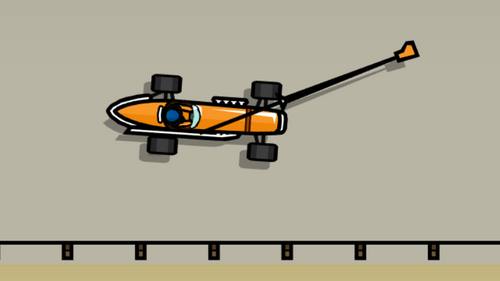 This update brings some significant features and updates and -- if you haven't tried GRITS Racing in a while -- now would be a good time to try it again.

The backstory to the design work:

Most important to me with this update is that the base game is finally approaching the level of silliness I had first imagined for the game.  This was brought about by adding a feature that allows the driver to fall out of the car in hard collisions (and partly by leaving the Tesla Shield on while driving).  This is a feature that has been discussed for a long time but, honestly, I didn't give it enough weight before because I was hesitant to spend time on the technical challenge of it.  I felt other things were more important early on and that losing wheels would reach the level of silliness I was hoping for with this game.  I was wrong.  The loose wheels bring as much frustration as they do fun.  More fun chaos was needed... and I wasn't terribly sure what that should be.

The sequence of events that led me here is this:  I wanted Wodifier selection to start before the first track and not just between tracks (because many don't play the game long enough to discover this whole other level to the game).  To do that, I needed one more Wod to have 8 Wods for an 8-track race.  When looking at my todo list of Wods, I decided to go for the jousting lances next for whatever reason (it was a gut feel).  The original alpha plan for the lances was to maybe just trigger the Wheel-eject button when hitting a driver -- thus, forcing the driver out of the car soon after that.  But, while dwelling on this for a few days, I was continually bugged by the thought that literally unseating the driver instead sounds much more fun than knocking the wheels off.  So, after thinking through all the work that needed to be done to make this happen, I decided to go for it.  And, the first step for that was -- guess what? -- actually placing the driver object in the car object (instead of object replacement like I was cheating before) and making the driver unseatable with a breakable joint.  Hence, a driver that can also fall out during a hard collision.  It was a beautiful thing when first testing this, and I was sold.  D'uh!  I already had a feature of drivers on foot....  So why not just exploit that code more?  Should have been more obvious to me.

I'm also extremely happy with the resulting code from the refactoring.  While some things are indeed more complicated with the new features, much of the code is now cleaner because some things are easier or more straight forward now that the driver object is always on screen for the duration of the race (unless you are an AI agent that chose to runaway after destroying your car).

This object-compilation change also triggered the long-awaited art changes to the car.  The new car art includes a hood that is slightly wider and is now much more close to what was originally envisioned.  A common complaint has been that the cars can get too hard to identify when things get messy.  So, even though the cars are tiny and will remain tiny, my hope was to improve color-identification of cars by 20% or so with more car-paint pixels.  I think I just might have accomplished that.  Yes, this is not a huge improvement but, hopefully, it will be enough of one.  Also, with a much-larger and much-more-realistic cockpit size, hopefully the front end of the car is also now more apparent.  The darker colors have also been lightened a bit (while still staying true to their international racing color origins).  The rest of the palette has also been tweaked to improve color saturation where shaded colors were desaturated for no good reason.  There are more sprite art tweaks coming, so stay tuned (not to mention the art overhaul at some unknown point).

After all that, jousting lances could finally be added (not that it went down in that exact order -- there was a lot of parallel development).  The lances brought about plenty of their own game-design challenges.  They aren't as fun as they sound... and probably never will be.  Thus, it was tempting a few times to stop work on them.  The cars are simply too high speed and twitchy, and the world is too open, for formal jousting to happen well (and, thus, I call the Wod "Jousting lances" and not "Jousting").  I kept working it, however, until I found a design that makes me fairly happy with them.  Again, a lot of refactoring throughout the game to make them work as I eventually worked it out through much testing.  The end result is not terribly easy to use for unseating other drivers... but still fairly enjoyable with how they interact in the physics environment.  Expect maybe only one satisfying lance hit per race.  I have cheated the width of the glove on the end of the lance as wide as I feel I can get away with (about 50cm) for the style of this game... but I'm not terribly sure I won't tweak it wider later.  Note that hitting the driver with the glove is typically required to unseat the driver with the lance.  Hitting with the shaft of the lance typically won't do it -- nor sliding back on the shaft to hit with the glove -- the hit has to originate with the glove.  Also, I'm pretty confident the first request many will make for future lance work is to make them steerable.  Hmm... I'm thinking on how best to do this and am open to suggestions on how exactly they should steer... of the three or so options I currently see.