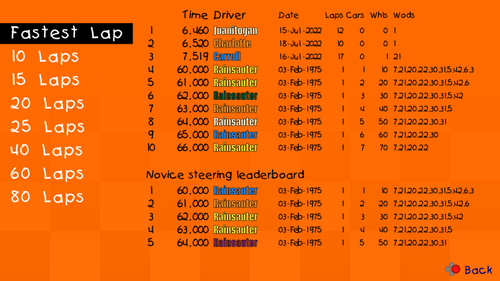 One of the few remaining major basic features has finally been added to the game.  Leaderboards!  (Yeah.. only local leaderboards... sorry if you were hoping for online global as well.  Those will arrive only once enough sales come in to justify the expense.)  As you will see once you get into them, adding leaderboards to such a broad game primarily targeted at a variety of party play, was no small task.  I could have made a more simple (and rather lame) first attempt... but I'm a data engineer by day and couldn't help myself by doing it right no matter the complexity of it all (just like how I, perhaps over-zealously, tackled the physics, skidmarks, audio, and wacky A.I.).

With leaderboards also comes bonafide co-op play (we hear small cheers in the distance).  That is to say, part of the array of leaderboards is a 2-player time-trial leaderboard.  It follows basic team-time-trial rules of recording the laps/time of the second player to cross the line, instead of the first player.  So, in other words, work together to get both of you across the finish.  This is automatically tracked in 2-player games, whether you like it or not; ignore it or not.  If you like this feature and want to see it expanded to 3 and 4 players, let us know.

Also, besides Championship and Endurance leaderboards, there are also overall leaderboards for race times and fastest-lap times (regardless of game mode they were set in).  Furthermore, the game also tracks what I'm calling "Maximum Mayhem" or not.  That is, if you always add a "wod" and never remove one, it knows that and rewards you with a separate leaderboard for it.  And, finally, it also keeps separate boards for novice steering (for when I add that feature).  Basically, too-many-thousands of records to manage in the database.  We'll see if I handled it all correctly on the first try (I did test, but it's a lot to test).

With leaderboards finally done, I can now hopefully get back to filling out the content (tracks and wods) and upping the art, etc.

Oh, yeah, the "Wods" (Wacky Wodifiers) on the leaderboards are still cryptic.  Sorry.  Not sure when I'll get around to displaying the wods better.  So, until then, here's my code that shows what those numbers translate to:

Also note that I cannot guarantee that scores set during "early access" will still be displayed once a final release is made.  With tracks still being made and tweaked, it wouldn't be fair to contest scores from one version of a track (or tracks) against another.  Some scores might even disappear during early-access development (such as when I make two more tracks and add them to the 8-track champ lineup [which currently runs 8 tracks from 6 in this order: 1,2,3,4,5,6,1,2]).  Outdated scores won't be deleted from the database -- it's that I will likely not bother to find a way to display such multiple versions of scores even though I do indeed store them separately.  It would be too confusing for the players most likely, and a lot of work for little payoff.

Similarly, note that the demo version of the game uses the same database as the full version, and that demo scores from the "Overall Leaderboards" will indeed cross over.  Because, however, the demo's 4-track championship repeats the first two tracks twice, scores from this will not be displayed in the full version's 4-track championship boards (which uses 4 different tracks).  If you really want to see those demo scores after moving to the full version, run the demo and they'll still be there in the db.