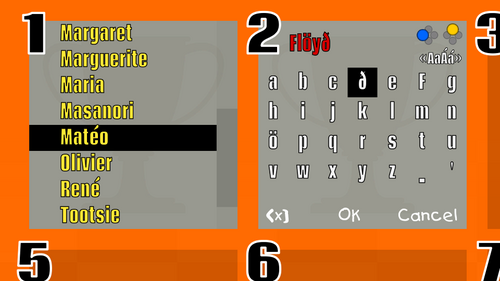 Features or content?  That is a tough question at times when choosing what to work on next.  This time, I chose features since many features that should make this game more attractive are still missing.  At long last, you can finally enter your own driver names.  Most of the Western European accent characters are also supported (use the X and Y buttons to change the keyboard key).  Names are saved for later easy selection.  100 names can be stored.  Saved names can be deleted with a tool found under the Game Options menu.

I had hoped to get to name entry sooner but it was no small amount of work to do it right.  Building menu features in Unity is a lot more work than just about any other tool.  Building menu features for the player punch-in windows is even more work since you lose what little help Unity gives you when building UI for simultaneous players and you have to build the event and focus system yourself.  I had a good foundation in place from the early punch-in windows... but it was still maybe 60 hours of work.  Time like that is hard to find in a world where you are desperate for work but somehow not cool enough to be hired by anybody anymore.