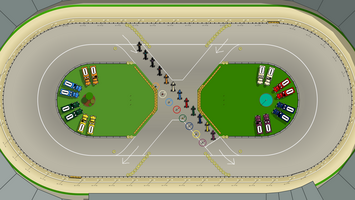 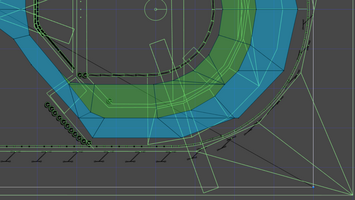 Say hello to the new Wandle figure-8 track!  (Based on the recently-demolished Wimbledon Stadium track in England -- and the same size as near as I could measure from satellite photos.)  I placed it at track 3 in the lineup and moved 3 to 5.  I hope ya'll like it as much as I do.  This track took quite a bit longer than hoped due to the additional features built for it and/or built for other tracks because of it.  About 200 hours.  It has simpler art than tracks before it but, hopefully, it is sufficient until we can come back and redo all the art.

Also, included here, for the ultra curious, is a photo of some of the physics rigging (the green lines) that goes on behind the scenes in these tracks.  As you can see, it's no small amount of work to rig up a track for all the features the game offers.

This update skips v0.2.7 (the new track) and went to v0.2.8 due to the new features that came with the new track shebang.

Some of the new features/fixes that add to making a mess:

In other news, still job hunting so time on this game is hard to guess and manage.  The next track will probably be a mini Suzuka but we'll see.  The current plan is to work on the remaining tracks in the same order as the order of colors/flags on the punch-in screen.  Thus, it could be a while before I finish minifying Monaco (the choice of Tootsie the Purple Privateer).  Before the next track, however, I need to build more Wodifiers and work out some other things holding things up.

Finally, in case anyone is keeping track, this game update serves as the August news post.  I don't plan to write a separate news post in months where I expect to publish an update.