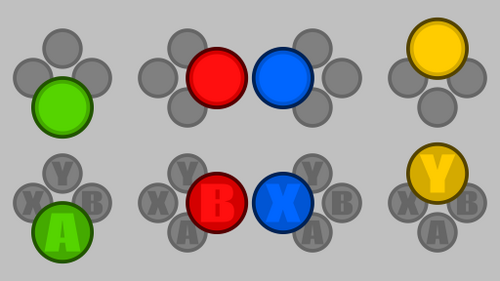 This is more of a hotfix than an upgrade.  This implements a small visual change in the menus.  The rest of what follows in this post is just a tl;dr peek behind the scenes.

I had made a previous claim that the next update would be the next track.  Well, that is still true, depending on point of view over hotfixes.  Regarding that track, the background art is now complete (if not simplistic for now).  The track will also need some new code because it needs to place trucks in a new way (and maybe the cars and drivers too).  So, a day for coding a new track feature, a couple more long and hard days for rigging, and it should be done... that is, whenever I can find time for those long days.

Back to the hotfix.  While working on the next track, I became distracted by something I noticed in the notes on the sales returns.  1/4 of the returns were claiming that the game had no support for keyboard control.  ???  Okay, I get it, the placeholder text I had for the buttons have been very misleading with keyboard players trying to do things with the ABXY keys... instead of what the ABXY gamepad buttons are mapped to on the keyboard for players 1 and 2.  But, still, "no" keyboard support?  Did they not try the arrow keys and Enter and Escape, which are always on for menu navigation regardless of how the game controls are mapped (WASD+MKJI, etc)?

Okay, I also get that many people will abuse Steam's return policy and just make up reasons for a return just to get a game for free.  Some may even briefly look around in the game for some stupid excuse to feel more "legit" about their activities.  Regardless, my placeholder text was long overdue for replacement.  Ideally, I would make the menu responsive to the inputs it sees.  But, I've got many higher priorities than that right now.  Heck, I'm not even at Steam's "Full Controller Support" yet (I need to write a replacement to Unity's launch window to earn that sales gimmick).  Who buys a car sim expecting great keyboard control anyhow?

Anyways... I took a small amount of time to draw some placeholder button icons to replace the placeholder button text. This doesn't directly help the keyboard players who can't bear to look around for one of the many places I've posted the default keyboard commands... or to use the Controller Setup feature in the game menus to define their own keyboard commands (and who also can't bear to ask anything before making a return).  The hope is, however, that these icons will help inspire keyboard players to look a little deeper for the key mappings to the buttons.  Don't know, but it's the best I can do right now for this console-first game.  I do care about keyboard control.  I test with it regularly and put quite a bit of thought into it.  The keys have the same gravity as the buttons and d-pad they map to.

Regarding the button art, I wanted something fairly universal to help players find the right button regardless of what kind of controller they are using (including the keyboard).  That's how I ended up with these silly paw-print-looking icons.  But, hey, it's a silly game that is nowhere near final menu art yet.  We'll see if it works for players or not.

Another common keyboard complaint is that keyboard control is too hard.  Well, frankly, so is gamepad control for many players -- and the keyboard is not much different (but, yes, somewhat more awkward to manipulate than a gamepad).

I've put maybe 1,000 hours into the physics behind these cars and their handling.  That probably sounds like too much time in an indie game.  That's why I often say this game has more realistic physics than perhaps a 2D party game should have.  Most of that was probably spent on testing and tweaking to find a car that feels really good to both me and to novices.

There were some helpful ideas on the net for setting up the physics on a 2D car... but none of them were correct on all points.  Thus, everything here was built from the ground up, and checked and rechecked.  Some things stumped me for quite a while.  Many discoveries were made only through long testing sessions when things just didn't "feel" right.  Once, I spent a week or two just looking for where I was going wrong somewhere in the transmission and power-train code.  It felt like something was off by about 5x.  I could have just fudged the correction... but that's not me.  When I did find the mistake, I calculated things were actually off by 4.8.  Trust your gut.  Fudging, no matter how creative, invariable leads to something someone will notice and not like.  (Well, I guess everything on the planet invariably leads to something someone will not like... but that doesn't make fudging any more acceptable.  I'm not fudge-free either though.  Some things just don't fit in the budget or the machine specs.)

So, yeah, the cars can be hard to control at first but, if they were easier, they wouldn't be nearly as interesting.  Hopefully, I'm not the only one that sees it that way.  The cars are tuned to where most players should get the hang of them in the first 60 seconds.  After a minute or two, most players should feel like they are mostly in control even though they may not feel "good" at it yet.  I achieved this while maintaining interesting collisions and such through a secret-sauce of driving aids.  More aid than I, personally, prefer (for example, it's harder to get into a donut than it should be), but it is what seems to be well balanced for most casual players.  I hope you like the effort.