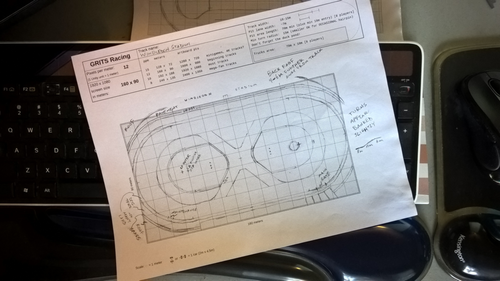 There are no major developments to report this month.  I spent most of June looking for a publisher for GRITS Racing to help push development along faster.  Most indie publishers don't bother responding... and, well, that is not surprising these days.  Of the ones that did, I got one nibble, but nothing else to report on that front.  It is hard to promote a game that is both an old genre and not visually interesting yet.

The next track, a British-style figure-8 track, got a small start in that I completed the engineering drawing for it (photo attached).  Curiously, this track did not need to be minified.  I also made a rough sketch of mini-Suzuka (seen in the background), another figure-8 track (due to flattening the bridge).  Plans have also been written down for how to minify Monaco.  Monaco is looking like it will be the craziest of the 12 mini-realism tracks (with a suicide lane planned)... but not as crazy as what the fantasy tracks might bring.

Anyhow, due to taking time to chase publishers, I still need to finish up a small contract and then look for what most people call a real job (like, maybe, being a greeter at Walmart) before I can return to working on GRITS Racing.

Thanks again for taking time to follow development on our game.