To Drift or Not To Drift? 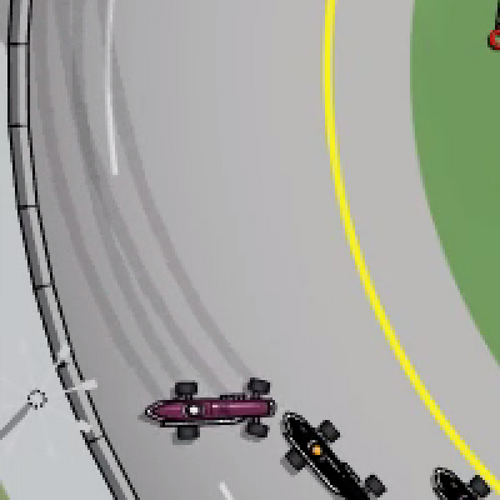 Drifting.  It's a word that sells.  In other words, if I changed the physics of GRITS Racing to easily drift the cars continuously and changed the name to GRITS Drift, we could perhaps expect to sell at least twice as many impulse-buy copies on that name change alone.  So, why not?

I'll answer that question with a few more questions, and then really dig into it for you.  Do NASCAR cars drift?  Do F1 cars drift?  No on both of those.  What it really comes down to, however, is that I wanted to build a car that felt really really good compared to all other 2D cars before it.  Thus, I didn't want a car that simply pivoted on center like so many do.  That is, I wanted both the power and the steering to come from the wheels.  My cars do that.  I also didn't want to sell out on that awesome physics I was building just for the sake of drifting.  The games I've seen that do that have cars that, in my opinion, move more like motorboats in water than real drift cars (if you ignore the visuals of the vehicle sprite, terrain graphics and skid marks).  I'm just not interested in that.  If you want to feel cool drifting a video game car so bad that you're willing to drive motorboat physics for it, that's your business, not mine.  I'm cool with that.  If it's a multiplayer game, I'll probably even join you.

Here's where, hopefully, it now gets really interesting: I used drifting as a the ultimate physics test when first programming the physics for these cars.  And, I eventually succeeded at building a car that drifted.  The crazy thing is that I had to do what real drift cars have to do to get them to drift with some control.  That is, I first started with a rear-wheel-drive and front-wheel-steering car, and then increased the steering lock to crazy angles and amped up the transmission torque.  I could then do inward donuts as well as outward drifting donuts.  It was quite satisfying.

I then made some notes in the code as to what it takes to drift the cars properly--with semi-real 2D physics--and then moved on to rigging the cars for what the primary game mechanics really called for.  That is: all-wheel-drive, all-wheel-steering cars.  The hope was to eventually come back to drifting at some point to add it as a Wacky Wodifier to the game.  There is still a hope there but the reality, however, is that it will probably not happen.  The primary challenge is this: gamepads.  As if controlling 430 pounds of torque in a lightweight vehicle isn't hard enough in real life with a steering wheel and pedals, try doing it with just a gamepad!  Drift or no drift, I have to add control helpers to the game to account for both lack of finesse with dual-analog gamepads, as well as to broaden the appeal to novice players.  After the majority of that was in place, I then went back to try the drift settings once again out of curiosity and, well, I couldn't quickly find a solution that allowed driftable cars with an enjoyable amount of control.  They were too squirrely for me to want to try to race with (I estimate maybe 1% of players might like it for more than a minute).  The helpers for novices and drifting setting are simply polar opposites.  Thus, if one wants to drift in GRITS Racing, they will likely have to wait and see what wet or icy surfaces might bring (if you can call it drifting still on such surfaces).

One of the secondary problems with adding drift as a Wacky Wod is that drifting requires rear-wheel-drive cars, and reconciling that with the rest of the game design is an additional challenge with no clear solution yet.

This leaves the question: Did I do the right thing?  I, personally, will always feel that dedication to quality physics modeling and smart handling tweaks is the right answer for how I feel I need to build.  But, I'm sure others have other opinions -- and that's what keeps the world interesting.  Only time will tell if my car physics can find an audience.