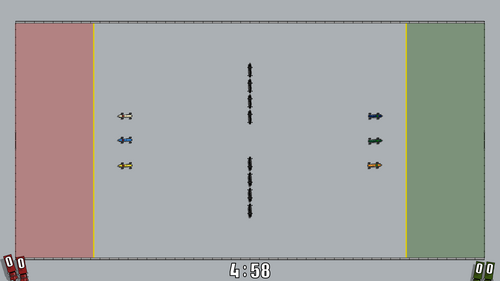 The debut of Prison Dodgecar signals the last major addition to the game before the first demo release.  "Yay!"  There are still a few things to add and wrap up before the demo can come out... but at least the release is in sight now.  It won't make it out before Christmas (which is a major bummer -- and a major miss on the hopes of having the first demo out a few months ago).

Prison Dodgecar is somewhat based on prison dodgeball (as you guessed) but perhaps shares more with billiards and bumper cars.  In other words, your car is both the player and the ball.  Some engineer got ultra-creative with the Tesla Shields one hot and sticky afternoon and amped up the shields from pedestrian protection to automobile protection.  Thus, unlike regular Billy Bubs, these dodgecar versions are pretty much indestructible due to the shields... that is to say, the wheels don't fall off... at least, currently they don't.

Seen here is basic background art that will be replaced at some point.  I tried a smaller field (about the size of the hockey field), but it actually felt too crowded with five or six players.  Maybe I'll eventually provide different fields for the range of 2 to 8 players... but no rush on that.  Also, rules for proper sets and match have yet to be added.

In other news, Mayhem Model 2 is still going through tweaking to find the best rule set for turning Wacky Wodifiers and Leader Lamifiers on and off.  (Not to mention that building and testing a good set of modifiers for this part of the game is simply going to take lots of time.)  I also rebuilt the player punch-in screen to make a lot more sense.  The last version was a quick addition to enable testing at the Mini Maker Faire, and this new version was indeed twice the code to make it more sensible.  And still not pretty.  Although, all the menus got a 10-minute makeover at the same time to make them a little more attractive with a funner font and a slightly fancier orange background (if such a thing is possible).

The biggest change, however, was probably the one that can't be seen: the yanking and replacing of the audio engine.  Perhaps not the wisest decision to do that but, if doing it, I thought it best to do it before any releases.  FMOD's Unity integration was simply getting too annoying to work it.  The way they tell you integrate all your sound effects simply doesn't work for all their event types... and they don't tell you that!  Thus, I was facing a rewrite from FMOD Unity components to FMOD API.  And, if I'm going to do that, I might as well shop the competition first.  So, GRITS Racing now uses the Wwise engine.  While their studio app is more complicated (partly due to more control) their Unity integration makes a ton more sense than FMOD's.  This, however, also came at the cost of waaaaay more bugs that slowed me down waaaaay too much.  So, it really is a race to the bottom between the two.  Both FMOD and Wwise are miserable to try to communicate with (at least, as an indie dev).  But, overall, happier with Wwise... but not happy with the wasted time with each.