Announcing the Beginnings of Mayhem Model 2! 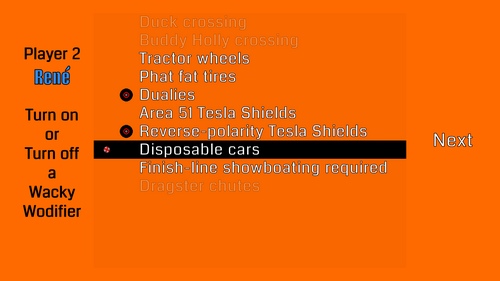 Technically, this announcement is 3 weeks late.  Mayhem Model 2 (MM2) first appeared with no fanfare in public on October 2nd at an Albuquerque Game Developers Guild meetup.  Then, the New Mexico Game Jam happened on the heals of wrapping up some of the first MM2 mods.  Then, that spilled over into a side project, followed by a slow start getting my head back into GRITS Racing.

So, what the heck is MM2???  Abstractly, it is an intent to build something other than just another top-down racer.  More technically, however, it is a set of game modifiers that are intended to change how the game progresses from start to end.  In other words, I intend to build the most realistic top-down racer ever made... and then beat it up with a sledgehammer!  Why?  Because nobody really cares about building a more realistic top-down racer.  That's about as exciting as building a better cup holder.  But, create an interesting physics playground and then give it Calvin-Ball-like rule changes, and maybe some parties besides the one going on in my head will find that amusing.

MM2 is also the greatest risk to this project.  I recognize that.  It may not fly in the end.  It's going to be quite the challenge to find (and build) a set of 25 or so game modifiers that don't lead to rampant rage quitting and/or simple abandonment.  Early testing has already changed the rules a couple times of how to implement the modifiers throughout the game as I think through how most players are likely to respond to the modifiers I have built thus far.

The basic plan is this: Between each track in a series of races (or at yellow flags during endurance races) the game selects one of the players to choose a (mostly goofball) game modifier for the next track (or later laps in endurance mode).  Early on, the plan was to have players ALWAYS ADD a modifier to the game (and all modifiers are additive to each other -- that is, none cancel each other out).  Later, however, I realized this was imposing too much restriction on play.  On a real playground -- you know, like at the park or elementary school -- rules get nixed as easily as they get invented.  Likewise, I decided players in GRITS Racing should be allowed to remove rules that aren't working for the group.  So, I then changed the game to allow the chosen player to either add OR remove a modifier.  After further thought, however, I have decided this could put too much pressure on a player to remove an unpopular modifier when they really want a chance to add one.  Thus, at some point in the near future, I need to change the game again to allow the chosen player to add a modifier AND/OR remove one (but a change still has to be made -- keeping the playground rules the same is not an option).  House rules can also come into play here as to how to obey the AND and OR options of this feature.

Finally, there are the specs of who gets to (or has to) choose a modifier.  Initially, the plan was to randomly choose one of the losers of the last track (the "lucky loser") to choose the next modifier -- except, in the case where a player is "on fire" then that player must choose from a different set of modifiers that are intended to adversely affect the race leader.  These specs are still mostly intact and probably will remain mostly so.  The nuances are evolving, however, around whether "on-fire" modifiers can be turned off by lucky losers, and also around what continued "on-fire" players should get to do.  We'll see where it goes.  No promises.

As you can probably see now, MM2 is radical and risky to try to fit into a video game.  It needs enough options to allow for a lot of flexibility in interests and for maintaining repeatability; and, yet, it also needs to somehow balance being tame enough to avoid triggering most (but not all) rage quitters and still being interesting.  As a result, some planned options have already been axed.  One was even built before it got the axe for migrating between frustrating and boring.  Bletch.  Another, "Finish-line showboating required" (seen in the attached screenshot) will be modified slightly and moved from the lucky-loser list to the on-fire list for being a bit fun but getting old a bit too quickly -- which makes it a good candidate for punishing only the race leader.

Oh, and, yeah, we don't have pretty menus yet.