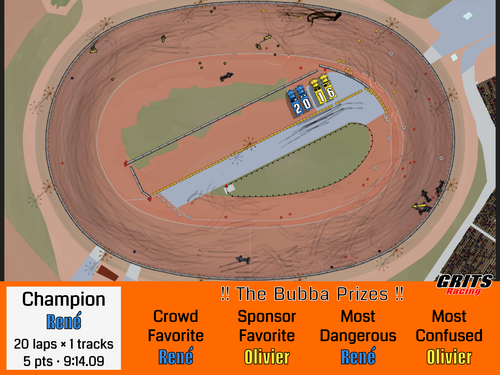 My desire has been to start the championship mode of play -- the primary mode -- off with four or so easy tracks to draw the novice and non-racing-fan players in more gently while the ulterior motive of the game slowly reveals itself.  That ulterior motive being, not racing, but player interaction on a playground where you get to define many of your own rules.  If the players choose to go all out for fastest times, so be it; but if they don't, awesome!

Anyhow, easy tracks basically means: ovals... and the challenge was on to find yet another oval that offers something interesting versus all the other ovals.  Then, suddenly, on a dark and stormy night, just before my plane touched down in Australia (or was that just me dreaming and I was really google-earthing around the planet?), I noticed the unusual diagonal pits (if they are pits) in some Australian dirt ovals (while I was really looking into AUSCAR tracks hoping to find ovals that go the other way -- you know: the other way).  I don't know how these "pits" were originally used -- they seem a bit unsafe as pits for pit crews given their current lack of protection -- but they appear to currently be used as skid pads, if nothing else, for burnout demonstration events.  Their current use doesn't relate to the game (I obviously made up how to use them for the game) but it's still curious to think about and I would enjoy talking to someone who knows their history.

And so, we now present our fourth track and third oval thus far, the "Wombat Oval."  A track based on a three-quarter-sized version of a track in Adelaide.  Giant truck tires also make their debut here and make for more fun toys on the playground.  We hope you enjoy it.