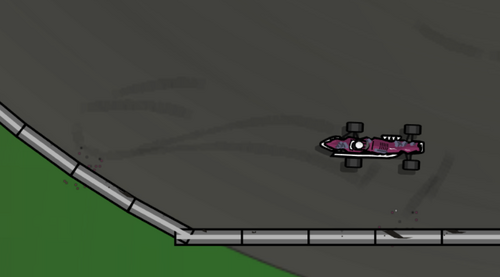 Yet another way to dirty up the track has been added: miscellaneous bits of colored debris on each car collision (the lighter-colored cars will leave more visible paint debris -- unfortunate but the way it is for now until I choose to cheat it a bit).  This is the last of the originally-planned dirt and skid stuff.  Oily footprints from the driver running through oil will eventually be added as well but that is likely a ways off.  This is not the end of all possibilities here (for example, should broken cars leave scrape marks?) but the likely end for now.