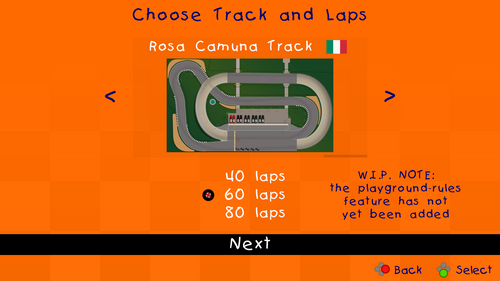 With 6 of the planned 24 tracks now built (well, prototyped) it seemed time to start fiddling with Endurance Racing mode so players can select their favorite track and hit it harder.  This is not really Endurance Racing as planned but it is sorta close.  The biggest missing feature is the yellow-flag one.  Currently, Endurance Racing is just a single-track championship run with more laps.  The yellow-flag feature is intended to take that one step further by pausing the race every 10 laps or so to allow one of the trailing players to change up the rules with the usual Wacky Wodifier selection.  Working out how to reconcile such changes mid-race, however, will take some time.  Thus, I chose not to wait for that before allowing entry into this mode.  (Besides, the menu work alone to get this working was a big enough lift [UI work in Unity is about 100x more work than it should be... and why we don't have better menus yet].)

A quick A.I. cheat was also added to Endurance Racing until I have time to build the real solution (whatever that may be).  A.I. cars cannot (under most circumstances) lose more than 2 wheels in enduro mode.  This is to help keep them relevant longer.  Considering the A.I. smarts that still need to be built, this doesn't feel like much of a cheat yet.

It's tempting to call this a bigger update than I am calling it, but I don't want to call it bigger until I have time to build more interest into Endurance Racing.