The Italian Mini Prix has Arrived! 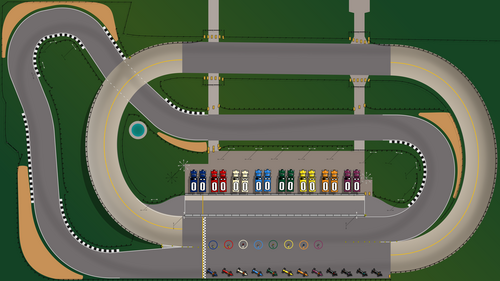 The Rosa Camuna mini GP track is finally ready for testing (loosely based on a minified Monza).  It was a long haul in part due to some awesome tool writing to make this and future tracks easier to build.  I hope you all enjoy it as much as I do.  Certainly not a beginner's track (you can't full throttle all of it; and be careful with the funky grip on the concrete banking).  You'll currently find it at track 6 in an 8-track lineup.

This release also brings a big change to a basic mechanic: max speeds.  I noticed many players were very happy with the max speed of the fat-tire car setup.  Well, that setup is 17% slower than the base setup.  Thus, I did some testing that I should have done long ago to see just how slow I could tolerate the max speed and still feel fast and dangerous.  To skip the long story of the deep look I took at things, I landed at cutting the base max speed 15% from 200 kph to 170 kph (124 mph to 106 mph).  Conversely, I increased the max speed for the big-tire setups.  I didn't dig into the gearbox, so the torques should be the same as before.  I think this saner pace is a good move for the majority of players and is pretty close to final, if not final.

Now, don't worry, speed freaks.  I then added a new wacky wodifier for a higher speed limit for all tire setups.  This wod increases the max speed 18% which kicks that 170 kph back up to 200.6 kph (just a smidge faster than the original setup).  I currently call the wod "Speed limit for pros."

Summary of changes wrapped up in this release:

Linux should see a new build shortly, after I make a few more changes in this current hard push.